The Xaverian Brothers arrived in America for the first time on August 1, 1854, in New York. By August 11, they had reached Louisville, Kentucky. This would be the beginning of a long and prosperous life for them in this country, a life that was to be considerably brightened by the rise of Saint Xavier High School of Louisville as one of the nation's outstanding secondary schools.

By 1864, the Brothers had moved to their fourth home, this time on 637 South Fourth Street. It was here that Saint Aloysius School was renamed Saint Xavier's Institute with Brother Paul Van Gerwen serving as the school's first principal. When St. X officially opened in September of 1864, there were seven subjects offered: catechism, bible history, geography, bookkeeping, algebra, geometry and French. Twenty years later, on July 4, 1884, the Alumni Association was started, with Saint Xavier's first graduate, Francis A. Menne (Class of 1873), as its president.

In 1890, the Brothers, cramped in their Fourth Street location and unable to expand, bought the Newcomb estate that extended from Broadway to Jacob Street and moved there in 1891. On Jacob Street, a brick stable was torn down and replaced by a building that contained eight classrooms. 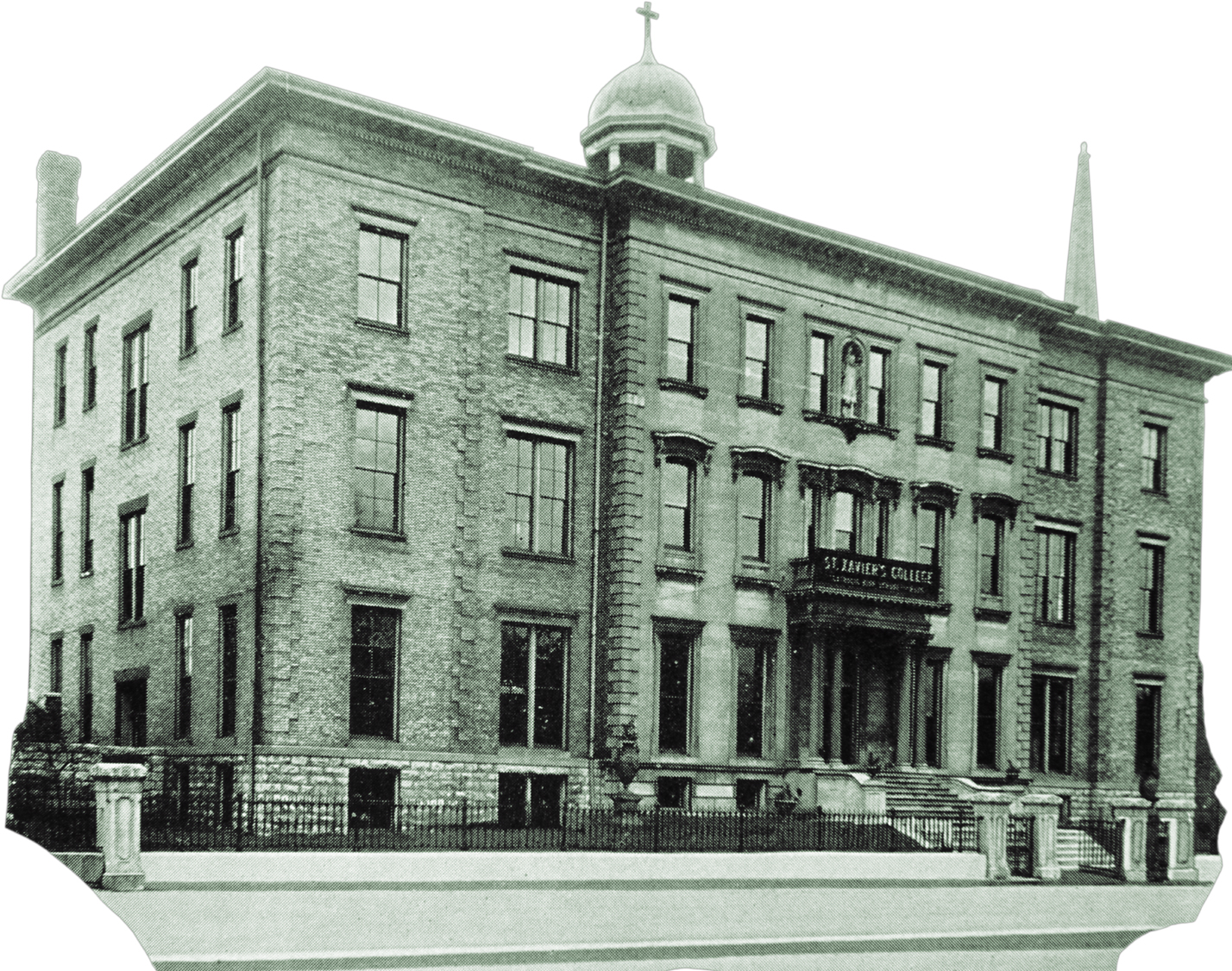 By 1900, a new building appeared on the lawn of the Newcomb estate. This was the new Saint Xavier, and it included a gymnasium and a swimming pool that were eventually replaced by science laboratories and a cafeteria. The original building was a rather impressive one, consisting of sixteen recitation rooms, eight on each floor. On the third floor was the auditorium, the largest in Louisville at the time, with a capacity of 1,200. This, too, was eventually replaced by classrooms when further expansion became necessary. Athletics played no part in the school life of Saint Xavier until 1909. That year, however, a baseball team was organized, when Principal Brother James Garrity finally gave his sanction to sports. Football, basketball and others followed shortly after. Soon the need for a proper place to practice and play basketball led to the construction of a gym in 1916 on the site of the old school building. It was the biggest and best gym in the city. Future Tiger athletes were to make St. X the home of champions. In 1926, St. X won its first state basketball title, defeating Danville 26-13.

In June 1925, the St. X yearbook, The Tiger, was first published. The school entered into interscholastic debates for the first time in 1926. Two years later, the Xavier News went to press for the first time. In 1940, the Tiger Boosters came into existence, and Brother Edward Joseph organized the band parents.

The Class of 1961 was the last class to graduate at 118 West Broadway.

The present campus, located on Poplar Level Road in central Louisville, opened in September 1961. It now consists of six buildings situated on a site of 54 acres. All buildings are air-conditioned, and are connected by a closed circuit television system. The main building contains the administrative offices, 42 classrooms, a guidance complex, fully-equipped laboratories for science disciplines, a special room for mechanical drawing, a cafeteria and a gymnasium. The school chapel adjoins the main classroom building.

In 1989, Saint Xavier High School commemorated its 125th Anniversary with several events, including a liturgy at the downtown Cathedral of the Assumption, celebrated by Archbishop Thomas C. Kelly, O.P.

The next addition to the campus, the Brother Edward Driscoll, C.F.X. Activities Center, was opened in September 1990, and was dedicated on December 2, 1990. The new addition houses 74,000 square feet of space for a 489-seat auditorium, athletic offices, a swimming pool and diving area, facilities for music studies, art and sculpture studies, a weight room, sports practice areas, offices for various student organizations, a large conference room, and an extensive campus store.

In the fall of 1996, Saint Xavier received the former Bell South facility (located just north of the main campus) through a gift/purchase arrangement. Fully renovated in the spring of 1997, the facility now houses the Office of Advancement, the Flaget High School Archives and meeting space. In the fall of 1999, Flaget Hall was added to the campus and sits adjacent to the original school building. This two-story facility adds seven classrooms and an additional chemistry lab. Also during this renovation, a second biology lab was created adjacent to the original lab on the second floor of the main classroom building.

The next addition to the campus came in the spring of 2000 when Archbishop Thomas Kelly and the Archdiocese of Louisville gave Saint Xavier the property that is now used by the Germantown Little League. That brought the total space of the school's campus to 54 acres. St. X is now the landlord, but has no desire to interfere with the little league. The newest addition to the academic building opened in the fall of 2002. A two-story office and meeting center for the academic administration and for the office of the president now greets hundreds of visitors to campus each year and has already hosted receptions and reunion dinners.

St. X recently concluded the most aggressive plans of its illustrious history with the completion of the Project X, a $28 million comprehensive campaign announced in February, 2005. The campaign had four initiatives aimed at transforming St. X into the best Catholic High School in America: 1) increase support for need-based financial aid, 2) growth for the school's endowment to enhance faculty compensation and need and merit-based financial aid, 3) technological and cosmetic upgrades for the main classroom building, and 4) new athletic facilities including a 6,000-seat stadium for football, soccer, track & field and lacrosse, a new baseball stadium, sports activities center for basketball, volleyball, and intramurals, a tennis complex, and a soccer/lacrosse practice field. In August, 2007, Brother Thomas More C.F.X. Stadium was dedicated before over 8,500 fans as the football Tigers beat the Ballard Bruins 19 - 14. Our newest venue, The Brother John Wills, C.F.X. Sports Activities Center, a 2,000 seat facility, was dedicated in January, 2009. The Project X Campaign concluded on December 31, 2009 securing $29.1 million.

Saint Xavier sets the bar high on and we lead the way in classroom technology. In August 2012, the school implemented an iPad initiative as studies have shown a strong correlation between the level of information retention and the level of the student’s engagement with the curriculum. Initially beginning with the freshman and sophomore classes, now all students are issued an iPad as standard equipment. Another way of engaging the students is through experiential learning. In recent years, Forensic Science, Computer Animation and Robotics, Introduction to Physical Science, and Engineering: Principles & Practice, have been added to the course offerings.

In August 2013, Saint Xavier completed a 3-year project to update the original classroom building that opened in 1961. In addition to refinished floors, new lighting, new ceilings, new lockers and desks, a new heating and air conditioning system was installed to provide students a more conducive environment for learning.

Over the past few decades, Saint Xavier has distinguished itself by winning special awards from a number of sources. The U.S. Department of Education selected St. X as a “Blue Ribbon School of Excellence” in 1984, 1989, 1993 and 2016. Also, St. X was named “Best of Louisville” in 1996, 1997, and 2016 by Louisville Magazine, and - thanks to a tremendous amount of generosity from the alumni - was named to the Council for Advancement and Support of Education's “Circle of Excellence” for its advancement program in 1998, 1999, 2000, 2001, 2006, 2007, 2008, 2011, 2012, 2013 and 2018. The Siemens Corporation has honored Saint Xavier for student performance on Advanced Placement Exams in science and math, and the College Board has annually recognized the school for outstanding achievement on Advanced Placement exams.