Michael Mattingly scored four touchdowns and the Tigers amassed 466 yards of offense, including 374 on the ground, in the 48-16 win over Trinity in front of a series-record 38,500 fans in 2005. 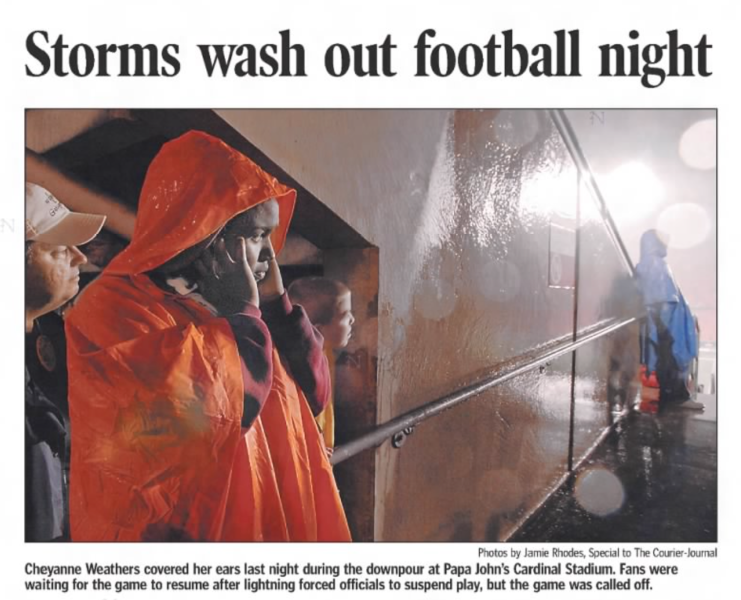 The high school football Game of the Year lasted only a quarter before storms and lightning rolled into the area in 2006.

It marked the first time, in 63 meetings, the game was canceled. #TNG

After 89 seasons of football and no home field, the Tigers finally had their own stadium beginning in the 2007 season.
8,250 fans packed Brother Thomas More Stadium to witness St. X overcome an 11-point deficit to defeat Ballard 18-14. #TNG

The Tigers snapped Trinity’s 26-game winning streak against in-state opponents with a 24-15 victory in 2007.

Deuce Finch led St. X with 19 carries for 182 yards and one touchdown. #TNG

The Tigers finished with 360 total yards and scored 30 against a Trinity defense that allowed just 4.5 points per game through its first four outings.

The game was played in front of a series-record 38,872 fans, and it was filmed by a crew from NFL Films.

The Tigers also debuted gold uniforms in the 30-6 win over the Rocks. #TNG

The 2008 squad holds the all-time record for most points scored during a regular season and postseason.

Deuce Finch made program history when he was named the first Mr. Football from Saint Xavier following the 2008 season.

He finished his career with 3,781 rushing yards and 58 touchdowns, including 1,397 yards and 30 touchdowns during his senior season. #TNG

Two Tigers have earned Kentucky’s Gatorade Player of the Year honors: Mark Askin in 1989 and Deuce Finch in 2008.

The award was established in 1985 to recognize the nation’s most outstanding high school student-athletes for their athletic excellence, academic achievement and exemplary character. #TNG

Jermiah Neal and quarterback Brian Buehner each rushed for more than 100 yards, and Daylen Hall had a 99-yard interception return for a touchdown in the 32-7 win over Trinity in front of 26,614 fans in 2009. #TNG

Tiger rushing was led by Michael Montano who ran for 67 yards and one touchdown and Jermiah Neal with 54 yards and two touchdowns. #TNG