Extra! Extra! Read All About It!

“In front of the 7,500 spectators…the Tigers of St. X toppled the Purples in the season’s most astounding upset. It was the eleventh day of the eleventh month, the eleventh meeting between the two schools on the gridiron, and the winning total was seven points. Tiger rooters burst out of the stands in a fit of joyous frenzy…they ripped both goal posts from the ground, splinted the wood for souvenirs and carried off the large tin and wood markers as mementos of the most glorious happy day of their lives” wrote CJ sports writer Earl Ruby.

Head Coach Paul Jenkins was able to achieve a feat his predecessors could not; St. X conquered Male 7-6 for its first football victory of the series in 1935. #TNG 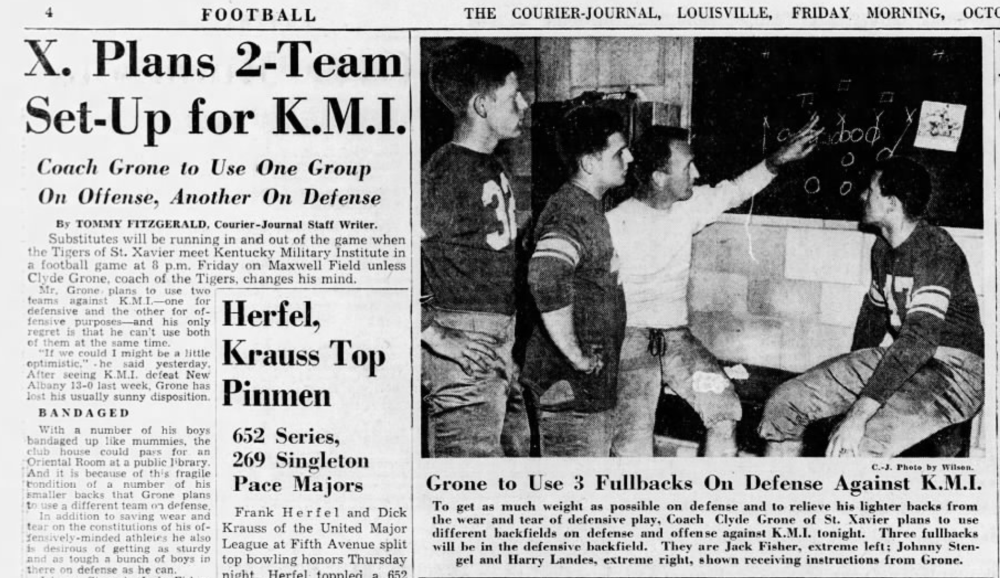 Due to several team injuries, Head Coach Clyde Grone decided to use a novel idea for 1942 and use two squads against a perennial power Kentucky Military Institute. One team for offense and one team for defense.

The St. X football program has had 18 coaches at the helm, how many of them were a graduate of Saint Xavier’s College/Saint Xavier High School? #TNG

The football program has had FIVE graduates lead the Tigers: 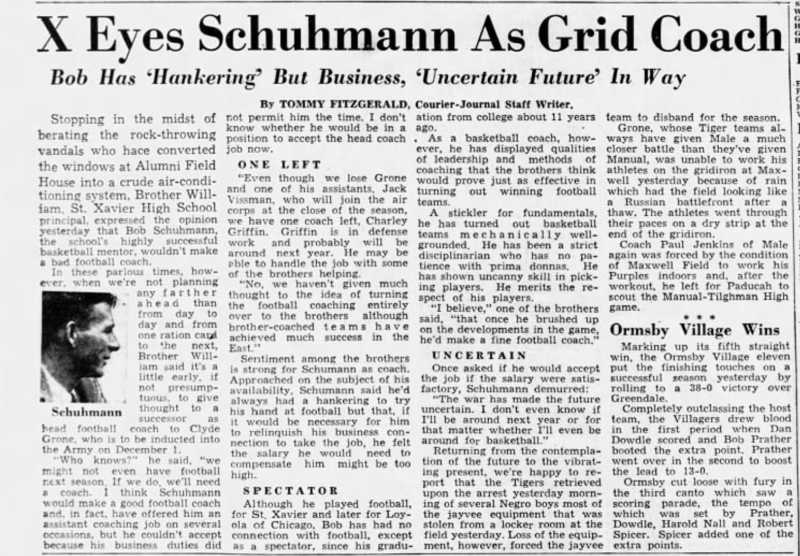 Bob Schuhmann ’28, St. X’s highly successful basketball coach, was offered to lead the Tigers on the gridiron by Brother William. Although he played football for St. X and later for Loyola, he had no connection except as a spectator since graduating from college 11 years prior.

He coached basketball for 14 years with his teams winning the state championship in 1935 and the national championship in both 1935 and 1938. Coach Schuhmann was inducted in the St. X Hall of Fame in 1984.#TNG 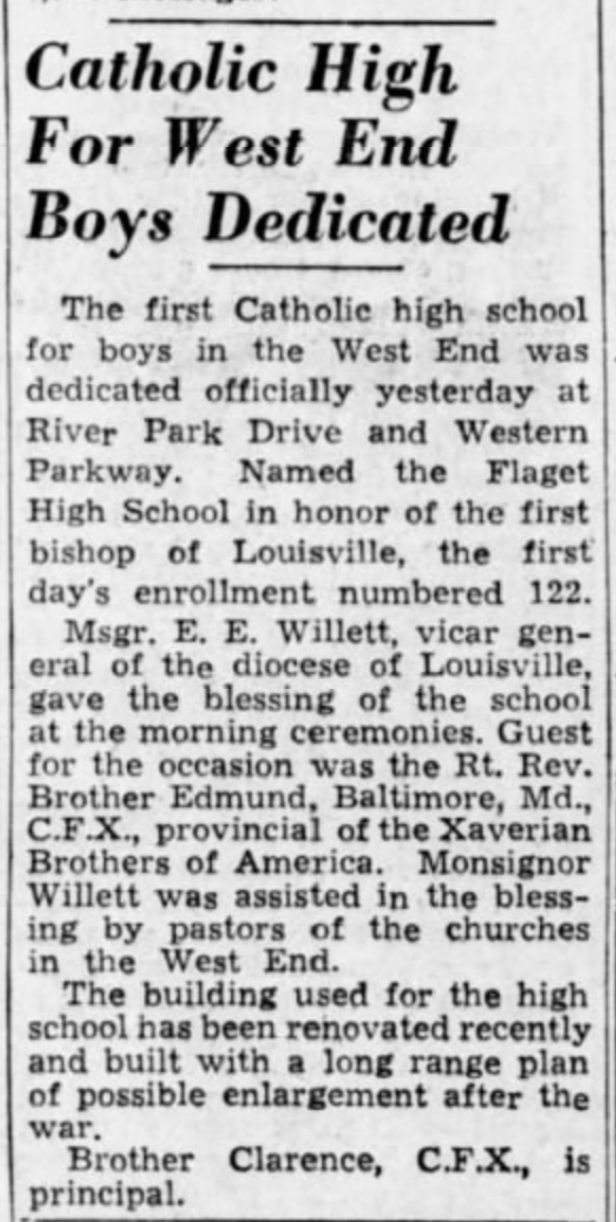 In 1942, the Xaverian Brothers opened a new boys school on River Park Drive. The rivalry on the gridiron between Flaget and St. X began in 1946 and fanned nearly three decades with the Tigers winning the final game 35-13 in 1973. #TNG

The Hasenour Trophy, created in 1947, was awarded to the football player in Louisville who scored the most points during a season. Four Tigers were recipients of the award: Ernie Heckman (1950), Dave “The Great” McGinty (1953), Bobby Reeves (1957) and Dick Hornung (1960).

Fourteen trophies were awarded before a 1961 KHSAA dictate was issued that stated the scoring sponsorship must end. #TNG 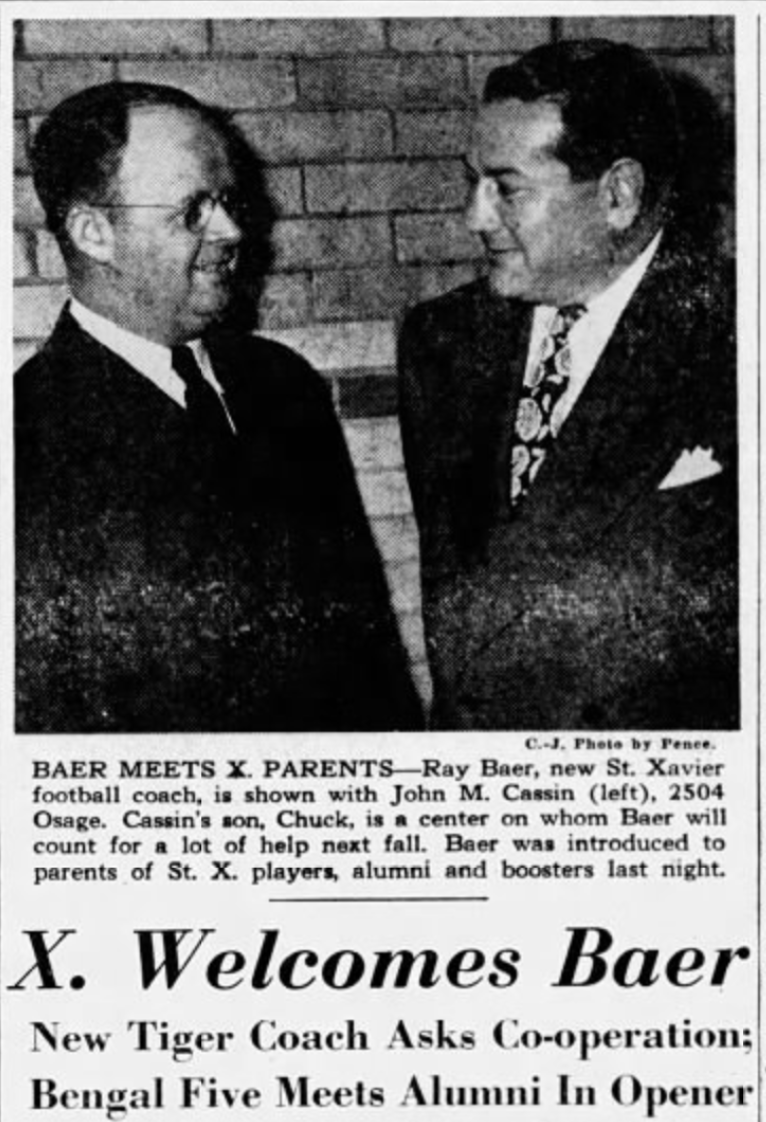 Ray Baer, the program’s 11th head coach, was hired in December of 1945. He played on the 1925 Michigan Wolverine team that outscored their opponents by a combined score of 227 to 3.

As the leader of the Tigers, Baer broke the longest losing streak (14 games) in school history, finally beating Manual 38-0 in 1947. #TNG